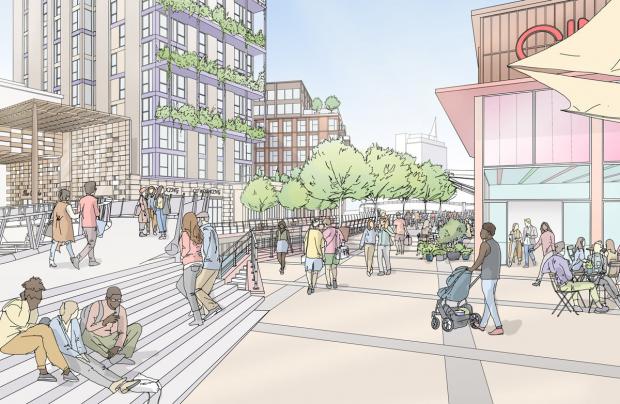 A proposal to transform part of The Oracle in Reading into apartments, offices and more has been met with a mixture of bewilderment and sarcasm by the public.

Earlier this week, Hammerson, the owners of The Oracle Shopping Centre, launched a website outlining its plan to demolish the former Debenhams unit and the Vue cinema unit and replace them with multi-storey buildings containing approximately 475 flats.

READ MORE: The Oracle in Reading could be transformed with 475 apartments planned

But people reacting to the news on Facebook are unimpressed that yet more apartments could be coming to the town centre.

James Ellis said: “Great more flats.. just what Reading needs .. more housing for the already over crowded town. The place is being ruined…”

There was disappointment at a perceived lack or loss of leisure provision.

The project would require Vue and Next Beauty at Home, which occupies the former Debenhams, to vacate, at least temporarily.

A CGI of what the transformation of The Vue and the Former Debenhams could look like at The Oracle. Credit: Hammerson

A plan to transform the House of Fraser into a bowling alley and food hall was approved in March 2021, but no apparent work has been done and the department store remains open.

Aliya Jetha suggested moving what was proposed for the House of Fraser into the old Debenhams.

The consultation website does that and creating a bowling alley is within Hammerson’s plans to ‘ensure a contemporary leisure offer that both engages and excites visitors along the riverside.’

The part of The Oracle which would be transformed as part of the east site redevelopment. Credit: Hammerson

In cases, there appeared to be some confusion over the nature of the proposal.

No official plan has been submitted, as Hammerson is conducting a consultation to gather public opinion on its proposal.

Others were concerned about the cumulative impact of the number of approved and proposed apartment developments in the town centre.

Vivien Cunningham pointed out that 900 homes are proposed at Forbury Retail Park.

Additionally, the old SSE site in Vastern Road is set to be replaced with 209 homes, and 600 homes could be built to replace the Reading Station retail park as well.

A common complaint about new developments in Reading is that they are not tailored for existing residents to upsize or downsize, and that the new developments may not be suitable for the disadvantaged.

Liz Everest said: “More flats for outsiders…  what about a few more bungalows for the old and disabled?

“The real people of Reading are being pushed out.”

The public can view the proposal and take part in the consultation on ‘The Oracle Consultation’ website, made by Hammerson’s planning agents Turley.

People can attend an in person drop in event at The Oracle on Friday, August 12, between 11am and 4pm in the former Crew unit (located on level 1 in Holybrook mall, directly opposite Hugo Boss).

There will also be a live webinar to provide further information on Tuesday, August 23, between 6pm and 7pm, which you can register for on the consultation website.