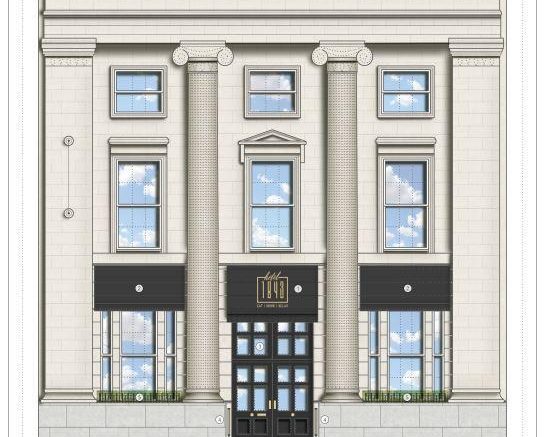 An iconic pub and hotel in Reading is undergoing a transformation that could see it being renamed for the first time in decades.

The Great Expectations has stood proud in London Street since it was opened in 1843 by Charles Dickens himself as a Literary, Scientific and Mechanics’ Institute.

After that, in 1866, it became a ‘primitive Methodist Chapel, and then in the early to mid 20th century it served as an Everyman Theatre, before becoming a pub and a hotel.

Since then, it has become known for its fine selection of beers, wines and spirits and being a great place for meetings and to watch sports.

Now, plans for the building show it being rebranded as ‘Hotel 1843’ with black boarding and gold lettering.

While the neoclassical facade of The Great Expectations would be retained, the Christmas-style green wrapping on the Ionic columns would be removed.

The plans have been submitted by the owning company addressed in Crowthorne.

The pub section of The Great Expectations closed in late June, but the establishment is still taking hotel bookings.

A statement on its Facebook page said: “Please note that we will be closed from Saturday, June 25, for refurbishment.

“The hotel will run as usual but the bar will re-open in the coming months.”

The plan for the ‘rebrand’ of The Great Expectations hotel in Reading as ‘Hotel 1843’. Credit: Bad Studio

As well as the rebrand, the plan involves installing awnings above the ground floor windows, replacing timber panels with glazing to match existing windows, changing the handrails to the entrance to make them bronze with a black finish, and adding black iron railings to hold new plant boxes.

Additionally, a lantern and black painted signage boards would be removed along with the Christmas wrappings and the distinctive ‘Great Expectations’ sign.

You can view the plans yourself by typing reference 221141 and 221142 into the council’s planning portal.

A public consultation on the proposals ends on Wednesday, August 31.

READ MORE: Reading town centre pubs that have closed down in past decade

Application 221141 relates to full permissions for the works and application has been submitted for ‘listed building consent’, as  The Great Expectations was Grade II listed in 1957.

Back then, it was referred to as the former Everyman Theatre.

Earlier this year, a licensing application was submitted by the Great Expectations for outdoor seating, so that the venue could put four tables and 16 tables outside for punters to enjoy from 8am to midnight each day.

The licence was issued in July, but is only temporary.

In line with Business & Planning Act 2020 regulations, permission will expire on Friday, September 30.