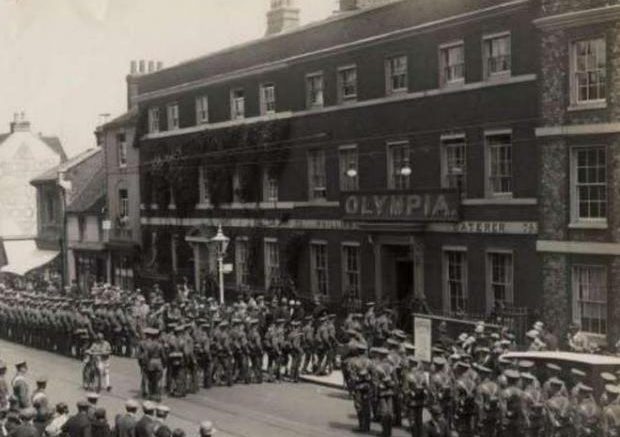 A historic dance hall that dates back to 1914 and hosted acts such as The Rolling Stones will be demolished and replaced with flats.

Last week, developers the Keen Partnership won permission to demolish the Olympia Hall in London Street and replace it with 12 flats.

The hall’s remarkable history has been told in a heritage statement attached to the approved plan, detailing its use during the inter war period and the famous acts that have played there through the years.

It is thought to have been built between 1912 and 1931, with a picture dating from 1914 showing soldiers in uniform outside the Olympia Dance Hall.

Olympia Hall as it was in 1914. Credit: Reading Museum / MP Architecture

Michelle Purnell, who wrote the heritage statement, judged that, although the rear is “of little aesthetic value from the exterior” the ballroom still has a high cultural value in Reading.

The statement reads: “Since its creation it has formed part of the social history of the Reading area playing host to many a large function or dance.

“Ball rooms were created for positive mental health and moral in WWI but dance halls really took off post war in the 1920s and by 1953 dance was a huge industry in the UK with up to 70 per cent of couples were considered at the time to have met on the dance floor.

Left, a dance, and right an evacuee tea party, both at the Olympia Hall. Credit: Reading Chronicle Collection

“In the 1950s the Olympia was famed for hosting famous music acts such as The Rolling Stones, The Who and Rod Stewart amongst others.

“As dance halls they fell out of favour by the 1970s and many such as this one became nightclubs.

“Olympia was a common name for a dance hall or exhibition space inspired by the London Olympia opening in 1886 which gained further momentum again from the London 1908 Olympics.

“Towns across Britain wanted their own large function hall ‘an Olympia hall’ to illustrate their success as and meet the demands of the growing local population for large dance spaces.”

The Olympia was renamed Shehnai in the 21st Century and used as an events venue, but is thought to have closed some time after 2018, with reviews of Shehnai from that year appearing on Google and TripAdvisor.

Michelle Purnell concluded that the loss of the hall would be outweighed by quality investment in the site and the provision of homes.

The ground floor of the front of the building will be converted into three apartments, making a total of 15 on site.

The front of the building, 75-77 London Street has its own unique history as well.

The neighbouring building, 73, was the home of Dr Anthony Addington who was famed as the mental health specialist who attended the ‘mad’ King George III – 75-77 were used as residences for his patients and are Grade II* listed.

The plan for works to 75-77 to create 15 apartments was approved on Wednesday, July 20.

You can view the approved plans by typing references 220244 and 220245 into the council’s planning portal.

The campaign to save Reading prison from redevelopment and turn it into an arts hub has received a second wind as activists are pushing for thousands more to sign a petition. Reading Chronicle | Town Centre …

A historic house in Reading that has connections to a local church could be up for an extensive renovation if plans are approved. Reading Chronicle | Town Centre …

A housing developer in Reading is moving ahead with its plans to build 974 homes across two developments in the town. Reading Chronicle | Town Centre …

A new restaurant is set to takeover a unit in a Reading mall that’s been vacant for six years. Reading Chronicle | Town Centre …

A proposal to transform part of The Oracle in Reading into apartments, offices and more has been met with a mixture of bewilderment and sarcasm by the public. Reading Chronicle | Town Centre …