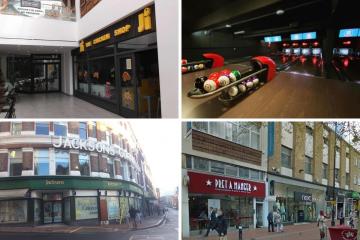 A new bowling centre, three new restaurants and a café could all be coming to Reading next year.

Food and entertainment businesses that are eager to open in the town have been busy submitting applications for licenses, shopfronts and constructing vital infrastructure in 2022.

These applications would see Jackson’s Corner finally being brought back into use again, and Reading benefitting from a new bowling and family entertainment – things that are few and far between in the town.

Where there are planning applications for work to current shopping units and buildings, you can view the documents yourself by typing in their references in brackets into the council’s planning portal.

Bowl Central, which currently has a location in Bournemouth is hoping to open in Reading in the summer of 2023 at the earliest.

It’s coming to the town involves the transformation of the old Dawsons music shop in Caversham Road into a family entertainment venue with bowling, electronic darts and token games.

READ MORE: When new bowling and family entertainment complex could open in Reading

Plans to serve food and alcohol and play music until late were clipped back to  11pm from Sunday to Thursday and midnight on Fridays and Saturdays following negotiations with neighbours.

Bowl Central also won permission for advertising consent and internal modifications to the unit in August.

The opening of the new café restaurant is still a way off, as the windows of Jacksons Corner are still obscured with branding. Credit: James Aldridge, Local Democracy Reporting Service

Rosa’s Thai Cafe was the first announced business for the regenerated Jackson’s Corner to the east of the town centre.

The chain has a presence in the biggest cities in England, and is known for its Thai curry, rice and noodle dishes and extensive drinks selection.

Earlier this year, it successfully applied to serve food and alcohol until 11.30pm Monday to Saturday and 10.30pm on Sundays.

It also won permission to build new kitchen extraction and air supply infrastructure from Unit 1 of Jackson’s Corner which it is set to occupy.

No opening date has been set yet.

Later in the year, in October, the burger chain Fat Hippo submitted a plan to occupy Unit 2 of Jackson’s Corner.

Its plan involves altering the shopfront to remove the iconic green and gold branding and install a kitchen extraction system.

Another Indian restaurant is due to open in The Village mall, previously known as Kings Walk.

In November, the Chilis Indian buffet restaurant opened in the upper mall, with Bombay Brothers also unveiling plans to occupy the lower mall this year.

Bombay Brothers successfully applied to sell alcohol on and off premises from 10am-10pm Monday to Sunday.

The company has also applied to install an extractor fan for its kitchen but no decision on that planning application has been made yet.

Café chain Black Sheep Coffee is set to open its second branch in Reading by taking over 60 Broad Street, which used to be occupied by Pret a Manger.

The chain has branches across the world and opened its first Reading branch in Queen Victoria Street in July.

The company applied for advertising consent to change the shopfront which was duly granted on October 6.