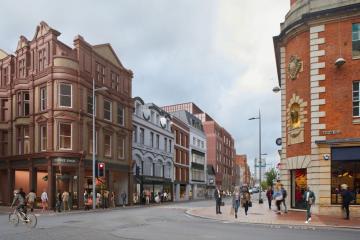 A scheme for a hotel, exciting new courtyard and shopping area which could change a corner for Reading forever will be decided on soon.

If approved, the project would see a new 163 bed hotel, 104 apart-hotel rooms and a new courtyard and shopping area come to the town centre.

Recently, the Local Democracy Reporting Service attended a briefing with David Owens, construction director at Thackeray Estates, and Paul Bottomley, planning consultant to get a better idea of their proposals.

Here’s everything we know about the development so far.

The plan for the area is divided into two parts.

The courtyard was approved in principle in June 2021, but Thackeray wants to make changes to 145-146 Friar Street as well, which cover Reading Food & Wine and WH Smith.

The second part, QVS2 would see 138-141 Friar Street, currently Revolución de Cuba and the Eyesite Opticians transformed into a 163 bed hotel run by operators Jurys Inn, which has already signed up to the project.

What will happen to The Bugle?

The Bugle will be incorporated into the Jurys hotel.

Although there will be a main entrance, people will also be able to enter it through The Bugle.

It will not be used as a private function room.

What would happen to the existing shops?

It is likely these shops would need to temporarily close or relocate.

Mr Bottomley said: “If they can be retained and incorporated and they want to stay, we want to keep them.

“These more modest units are for the independent users, effectively for the retailers that we have already.”

It is possible that WH Smith will remain open but will operate at a reduced size to its current form.

“The first floor is enormous, they’ll condense down. And they’ll be doing that anyway.”

Along Queen Victoria Street, Thackeray estates want all the businesses to have the same black and gold branding ‘with a consistent style’ to create a character area.

Mr Owens explained: “The whole idea is that we’re going to keep the existing tenants, and we’re going to bring in independents, cafes, and the big pull will be the apart-hotel.

“We don’t see this as being a drinking venue.

“The idea is that when you arrive from the station it’s fully restored, we’re going back to this historic quarter effect on shopfronts.”

An apart-hotel mixes the services a hotel provides with full apartment living accommodation.

Thackeray has not got a chosen apart-hotel operator on board yet, but they envisage customers making either short but returning stays to Reading, or people who will stay for a few months at a time.

What is the timeline for the project?

Both plans could be decided on as early as December.

Once approved, QVS1 – the apart-hotel and courtyard- would take approximately 14-15 months to build.

Meanwhile, QVS2 -the hotel- would be constructed in about 18 months.

You can view the applications yourself by typing their references into the planning portal: