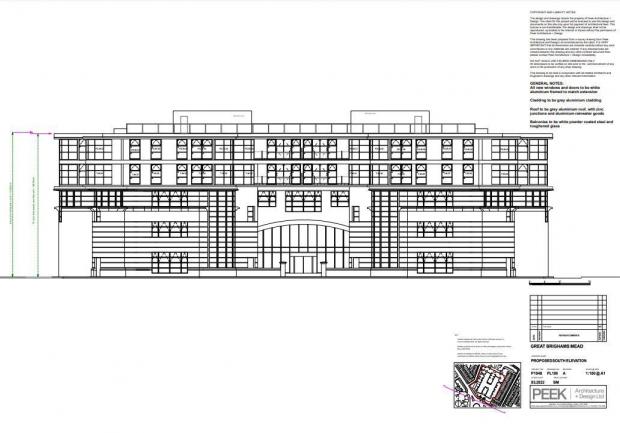 A plan to add extra  levels to the former offices of the Three mobile network in Reading to create more than 70 apartments has been refused.

Great Brighams Mead in Vastern Road used to be the UK HQ of the Three mobile network, which has since moved to bigger premises in Green Park.

The building was vacated and in June 2021, permission was granted to convert it from officers it into 110 apartments.

However, a plan to make these substantial modifications has been shot down by Reading Borough Council’s planning department.

Firstly, officers disputed over how many storeys would be added.

According to the plans (application reference 220778) two storeys would be built on top of the existing roof.

But the planning department argued a fifth storey roof level constituted a three storey addition instead.

It also argued against the design of the plan, stating the additional storeys would “produce an incongruous and boxy addition” to the building.

Furthermore, it was judged that materials proposed would be both out of keeping with the area and the existing building itself.

Great Brighams Mead is currently made of a mixture of brick and stone, with the developers proposing that the new storeys be made of glass and metallic panelling, which its agents Future Planning stated would “complement” the host building.

What Great Brighams Mead would have looked like if the additional floors were added. Credit: Peek Architecture and Design Ltd

The council planning officer also argued the development would be detrimental to those living in De Montford Road and 17-21 Vastern Road, with the additional floors thought to overshadow the existing homes and restrict access to sunlight.

No appeal has been lodged so far, with any appeal having to be submitted within six months of the decision.

The plan was submitted as a prior approval application, because it relates to a conversion of offices into homes.

These conversions are typically allowed under permitted development rights, but developers do have to submit plans to the local planning authority to ensure they are acceptable.

These submissions are called prior approval applications.

The conversion of Great Brighams Mead from offices into 110 flats (planning reference 210567) was granted to applicants McKay Securities last year.

The 72 new apartments would have added 36 one-bed and 36 two-bed units.

The nearby area is due for a lot of development, with housebuilders Bellway due to submit a plan to build 60 homes on the opposite side of the road by demolishing the Carters store, which closed in December 2020.

Additionally, 209 homes are set to be built at the SSE site in Vastern Road, and 600 homes could replace the Station Shopping Park.