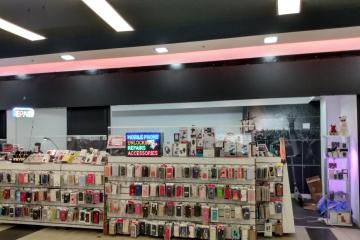 A PHONE stall in the Broad Street Mall will be able stick around for a bit longer despite being hit with an eviction notice.

Back in September, Deepak Dhall, 37, and partner Harjinderpal Singh, who run the Quick Phone Repair were served with an eviction notice by mall management.

Luckily, they were able to extend their trading licence after the issue was highlighted to the Local Democracy Reporting Service.

Now, the stall has moved next door to Taco Bell to make way for The Calendar Club stall, and the partners have been allowed to stay longer than expected.

But Mr Dhall claims he had to wrangle with mall management to be given the extension.

Mr Dhall said: “I said ‘sorry, this is called harassment, how could you give us just a small amount of space?’

“I explained this situation to the management, that we want to do this Christmas period.

“The general manager said we will be moved by security. ”

The stall has moved to the entrance of a shopping unit without fully occupying it.

Mr Dhall explained: “They gave us a bit more space, but we can’t go into the unit but they did open it to give us space to have a stand.

“We can’t stay there though, they have given us a licence until November 30.”

Soon,  Quick Phone Repair will be moving to a dedicated shop in Oxford Road, which will be revealed when they open.

Mr Dhall has urged the Broad Street Mall to reconsider and grant the stall a licence until the end of December.

He explained: “Our new premises are going to be empty by the end of November but we have to get it refitted, and woodwork needs to be done.

“I can’t move by the end of November, that fitting work has to be done.

“I’ve spoken with the mall’s client director to let us stay till the end of the year.”

While the Broad Street Mall has not given Quick Phone Repair permission to stay until December, it has offered storage space to support their move.

A spokesperson for the mall said: “There has been no harassment from Broad St. Mall or the Property Management team involved in this matter.

“Quick Phone Repair’s licence was for a fixed period and expired at the end of October, however both parties agreed on an extension until the end of November.

“Quick Phone Repair have not been charged for the commercialisation space during their extended agreement and Broad St. Mall are continuing to support with Mr Dhall with his transition to new premises in December.

“This is a long-standing agreement and traders who co-occupy this space are aware that they will be located to an alternative location in the mall during this time.

“Broad St. Mall have enlarged the trading space for Quick Phone Repairs for the month of November and have offered storage space thereafter if required to support them during their move.

“Broad St. Mall have not broken any contract terms.”