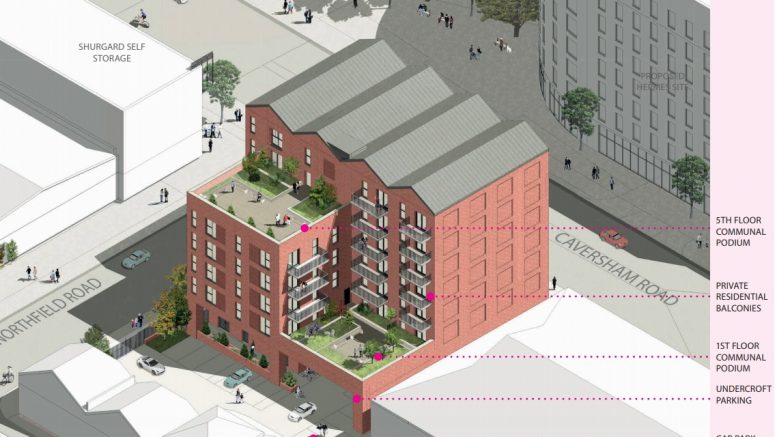 The historic former Drews Ironmongers hardware store has been saved again from demolition, with a planning inspector rejecting the appeal of a developer who planned to replace it with 44 flats.

Plans to demolish the locally-listed building on 71-73 Caversham Road, which is also a former malthouse, and replace it with a seven-storey apartment block were rejected in October 2020 by Reading Borough Council’s (RBC) Planning Applications committee.

An appeal was lodged by developer S2 Caversham but has now been rejected by a government planning inspector, who said the benefits “do not outweigh the significant harm the proposal would have on the character and appearance of the area and the significance of a non-designated heritage asset”.

David Neale, chair of the Bell Tower Community Association, said: “Good news for our area’s heritage, with the announcement that the planning appeal for the Drews site has been dismissed.

“The developer will now almost certainly have to look at how the building might be adapted and produce a new design that is more harmonious with the former malthouse and the character of the local area.”

At the appeal meeting on March 24, the BTCA pointed out that the proposed development would be out of keeping with the existing buildings on the western side of Caversham Road and stressed the former malthouse’s long and varied history and contribution to the area’s character.

Design of the planned building at the former Drews Ironmongers site

Mr Neale said the BTCA’s representation was also strongly supported by local councillors at the meeting.

RBC’s planning committee refused the application in October 2020 after receiving a petition with more than 1,200 signatures calling on the council to save the former malthouse.

The committee raised concerns about the loss of the locally listed heritage asset and the height of the proposed seven-storey building.

And councillor Tony Page, lead member for Planning at RBC, slammed the developer for “belittling” the building and “exaggerating the difficulties of retaining its external features”.

The building was locally listed in early 2020 following a campaign from the BTCA.

Developer S2 Caversham was proposing to demolish the main building and build a seven-storey block of flats.