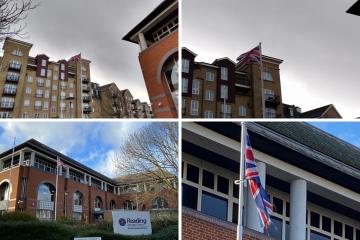 A call has been made to replace the ‘tatty and frayed’ Union Jack flag outside the Reading council offices.

Councillor Laura Blumenthal, a Conservative representative for South Lake in Woodley has drawn attention to the issue on Twitter.

“Reading is a proud town; can we have a decent flag?”

The issue was raised by cllr Blumenthal on December 29, 2022.

The flag remained in a poor condition when the Local Democracy Reporting Service observed it on Friday, January 6.

A spokesperson for Reading Borough Council said a replacement Union Jack has been ordered.

A number of different flags appear alongside the Union Jack outside the council offices throughout the year.

At the outbreak of the Russian military invasion of Ukraine in 2022, the Ukrainian flag was installed.

The blue pink and white transgender flag was hoisted on Trans Day of Remembrance which happens on November 20 each year to remember those who have been murdered as a result of transphobia.

The Union Jack was flown at half mast during the period of mourning following Her Majesty Queen Elizabeth II’s death on September 8, 2022.